How can a simple technique create so many benefits?

“No other ‘stress management technique’ has anywhere close to TM’s amount of hard data in support of its claims to reduce stress.”
Norman Rosenthal, MD, U.S. National Institutes of Mental Health

A simple enjoyable technique that has better effects than most medicines, but without any negative side effects, must sound too good to be true, but the benefits of Transcendental Meditation on health and well-being have been backed up by hundreds of studies from over 250 universities and research institutes around the world.

6 million practitioners and 40 years of research confirm that Transcendental Meditation is the most successful relaxation method in the world, because it creates a far more profound state of rest than ordinary relaxation. 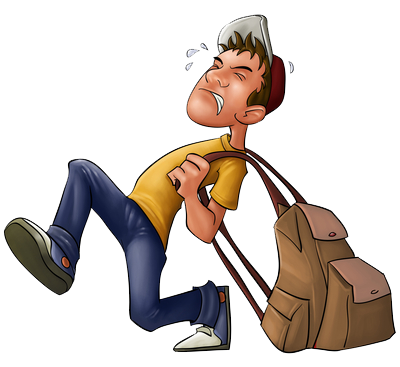 Stress is like a backpack full of rocks. Every experience we go through leaves an impression that is stored somewhere in the body. If the experience is very intense we can feel this clearly, for example: that feeling of a knot around your heart after you have had a fight with someone. If you collect too many rocks like this, sooner or later the weight of stress will start to disrupt the normal functioning of your nervous system; resulting in health problems, anxiety, depression, sleep problems, and – if the weight really gets too much.

Fortunately we have a way to remove these rocks again…and we don’t even have to do anything. The body will do so automatically, when it is at rest. Rest is the antidote to stress. When we sleep during the night, the body will remove all the rocks we accumulate during the day, so the next day we can start afresh… in theory.

The problem is: the rest during sleep is not enough. Have you ever felt how that knot around the heart may hurt a bit less after a good night sleep, but it hasn’t gone completely? The sleep was not deep enough to remove it. This will probably become a rock that you’ll have to carry with you for the rest of your life.

Transcending…a profound state of rest that can be measured. Transcending is a state where the mind spontaneously reaches a state of complete inner silence while remaining fully alert (see more below). Research from Harvard Medical School showed that during Transcendental Meditation (TM) practice the body reaches a deep state of rest far more quickly than during sleep. Ref.Science 27 Vol. 167 no. 3926 pp. 1751-1754 1970 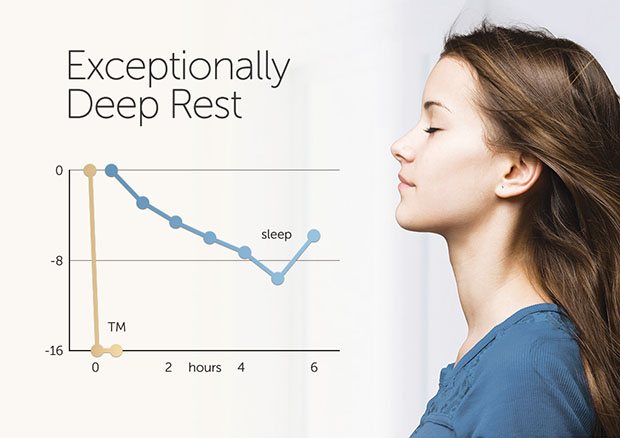 More than 30 researches over the past 40 years have confirmed this deep state of rest during TM practice, far deeper than ordinary relaxation.Ref.American Psychologist, 1987, 42: 879-881.

This deep rest allows the body to effectively remove our rocks. It works, even with those who have to carry a bigger backpack than just about anyone else. 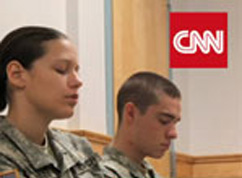 Post Traumatic Stress Disorders (PTSD) with war veterans are generally considered incurable. Over the last 15 years more soldiers have died from suicide at home than on the battlefield in Iraq and Afghanistan. They just didn’t see any other way out. Yet a recent study with Iraq War veterans showed a 50% reduction in PTSD and depression after only 8 weeks of TM practice.Ref.Military Medicine, june 2011 The results were so impressive that CNN did a feature on it (Watch the CNN Video ).
And the US army is now actively supporting the TM technique for its soldiers. Ref.http://www.army.mil/article/139778/

In a similar earlier study with Vietnam war veterans the TM group saw such significant improvements on a wide variety of mental problems that after only 3 months of practice 70% of the war veterans required no further treatment. In contrast, the control group that received standard psychotherapy showed no improvement.Ref.Journal of Counseling and Development 64: 212–215, 1985 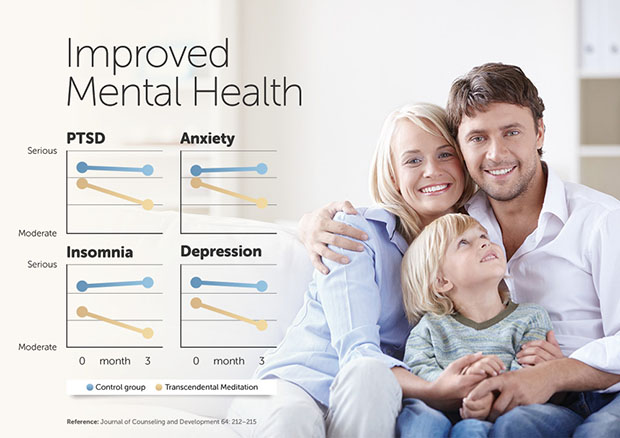 These studies show that we are actually far more powerful to heal ourselves than we can imagine, we only have to learn how to activate the healing process. If even war veterans can heal their PTSD through TM – where all other approaches failed – it can probably help just about anyone.

Over the past 8 years the department of Education in San Francisco has done 17 TM studies in 4 schools, showing the powerful effects of the combination of reduced stress and more complete brain development as a result of TM practice.

These results are confirmed by a pan-european survey of 500 TM practitioners, where 97% felt that TM was a good investment.

By now 450 schools in 60 countries are using the Transcendental Meditation program as part of their school curriculum.

Do you have 90 min to discover how everything can change?

“I have tried meditations but I could not do it. I concluded that I’m apparently incapable of meditating… when I learned TM it was the easiest thing I’ve ever done… I got my entire family to learn.”
Cameron Diaz

The first step to learning TM is simply to attend a free info seminar where you can:

This free info seminar is without obligation to take the further course.

A full TM course consists out of 4 sessions of 2 hours to learn the technique plus a follow-up program over the next 6 months to refine the experience. People who learn once can retake the course for free at any time during the rest of their lives.